A deeper look into Whatsapp and Facebook’s fake reviews frenzy 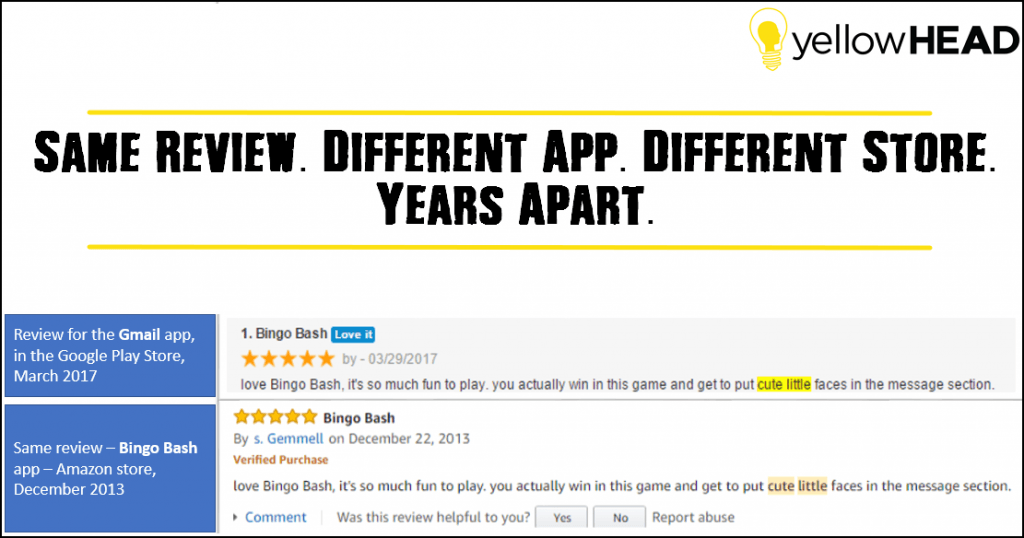 Following the insightful article by The Next Web (Google Play Store Review Botnet) that uncovered a particular burst in irrelevant positive reviews for some huge apps, the yellowHEAD App Store Optimization team set out to investigate further and explore the implications for ASO.

What was reported in The Next Web?

Between mid-March and mid-April, there was a huge spike in what seems to be fake 5-star reviews in certain huge apps, including WhatsApp, Gmail, Facebook and Facebook Messenger. These reviews are extremely suspicious since they address topics that are completely unrelated to communication apps, such as games. Moreover, several reviews mention Kindle, which is also very odd since those were left on Google Play. The Next Web hypothesized that those were caused by bots in an attempt to bypass the Google Play reviews filter.

We felt that there’s a bit more information here that was yet to be discovered and decided to have another look for ourselves. This blog post will include some additional findings we have seen that might shed some more light on this mystery.

Here’s what we found…

The Next Web’s article mainly looks at the frequency of the word GAME in the reviews, illustrating just how irrelevant the reviews are for apps like WhatsApp, Chrome and other tools that are definitely not games (hereon in we’ll refer to these as ‘The Communication Apps’). We took this a step further and checked a more expanded list of game-related keywords like SLOTS, BINGO, POKER, etc. We found quite a high frequency overall for these words as well.

Initially, TNW reported that the fake reviews mentioned the irrelevant word “games” and therefore were both suspicious and generic. While the reviews are in fact very suspicious, they are often far from being generic. Among these reviews, we also found a high-incidence of app brand names being mentioned. What surprised us was that some of the brands mentioned are yellowHEAD ASO clients, so we know for a fact that they do not practice any black hat techniques – neither review incentivizing nor the use of review ‘bots’.  [Hereon in, we’ll refer to the games mentioned in suspicious reviews as ‘The Gaming Apps’]

3. NO CHANGE IN THE GAMING APPS’ REVIEWS

We didn’t see any significant change in reviews for the Gaming Apps during the time period where we saw the increase in the Communication Apps’ reviews. This strengthens our assumption that the suspicious reviews were not initiated by the Gaming Apps.

4. LACK OF REPETITION WITHIN GOOGLE PLAY

So where are these reviews coming from? Are they bot-creations as The Next Web theorized? Drumroll please…

5. DEFINITE REPETITION OF REVIEWS FROM AMAZON

Where we saw mentions of specific Gaming Apps in the reviews, we checked them in the Amazon Store (since The Next Web noticed such a high incidence of ‘kindle’ mentions). And BINGO! We found exact matches of the recent reviews in Google Play for Communication Apps like Twitter, Gmail, WhatsApp, Facebook, Instagram, Skype and Messenger that already appeared in reviews for the Gaming Apps in the Amazon store.

Below are some examples of reviews for a Communication App on Google Play that we also found for a Gaming App in Amazon:

THE ASO IMPACT (or “LACK THEREOF’)

The Communication Apps’ star ratings aside, we saw an opportunity to really investigate the long-held ASO theory that keywords mentioned in positive reviews will help boost the app’s ranking for that keyword.

Since it’s generally assumed that reviews do affect keyword rankings for phrases mentioned there, we expected to see positive jumps for both 1 & 2 above.

However, after taking a careful look at keyword rankings, we found no effect in ranking trends for neither the Communication nor the Gaming Apps.

It seems that keyword ‘stuffing’ in reviews as a black hat technique is quite fruitless after all. Perhaps the context for the Communication Apps was so far off that the algorithm recognizes the irrelevancy.

What is still undeniable is the importance of reviews and ratings for conversions. However, so long as the user is swayed by the content of the reviews, not just the rating, they would anyway not take the game-related reviews to heart. It’s as if a black hat technique as such would be more useful without any written comment at all – just a 5-star rating would not leave any clues.

All things considered, because there was minimal benefit to be had with the events described above, we believe the whole phenomenon was either inadvertent – a glitch in the reviewing system – OR, to take The Next Web’s theory further – the result of a bunch of very advanced, yet quite poorly-instructed bots.

Want to hear more from our App Store Optimization experts? Meet us at MAU!