Can you imagine that, back in 2009, Android Market (renamed Google Play in 2012) had only 2,300 apps available? It’s hard to believe now, right? With 2.7 million available apps in the Play Store and over 82 billion apps downloaded to date, more and more app developers are finding success on Google Play. And Google continues making big investments to give developers super powers to grow their business.

In this article, I’d like to recap all the new things Google announced for the Play Console at Google I/O 2017. Here at yellowHEAD, we are very excited about the new tools and features the Google Play Console has to offer. Our App Store Optimization experts are crafting new ASO methodologies based on those changes to ensure that they have the maximum impact on your app growth. So check back for a follow-up post from our ASO team soon.

Let’s dive in with some predictions for the future of the app economy!

According to App Annie’s Market Forecast 2016-2021, consumer spend in Google Play (and 3rd party Android stores) should overtake iOS for the first time ever in 2017. While the iOS App Store remains the leading app store, Google Play has a bright future due to its dominant smartphone market share and strong growth in installs.

Now Google obviously wants to make these numbers grow by giving app developers tools to do much more than just publish apps.

First, it starts with renaming the “Developer Console” to the “Play Console” – that reflects the fact that people in different roles (not only developers) use the Google Play Console to perform a variety of tasks. In addition to a new name, Google gave a fresh look to the Play Console’s UI with a clearer and cleaner design.

The statistics page in the Google Play Console is getting much better, with the latest updates announced during Google I/O 2017. In addition to quick and easy access to all the important data about your app business, developers can: 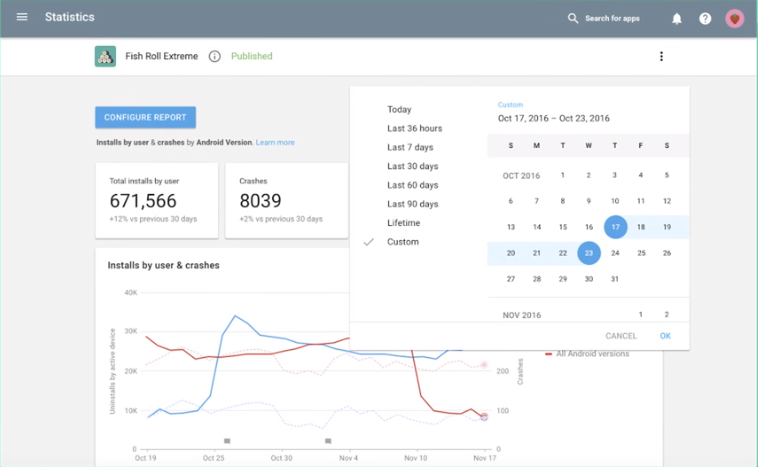 This report helps developers understand how effective their marketing efforts are for acquiring and retaining valuable users. It shows the number of visitors to the app store listings, the number of installers and buyers.

50% of all 1-star rating reviews discuss issues with app stability. The #1 thing developers can do to increase their star rating is improve the stability of their apps. The new tools that Google has just introduced were built to help developers understand the performance and reliability issues within their apps.

6 Google Play Console dashboards called Android Vitals will help you locate flaws in your app and improve your app experience, which is crucial for your app’s star rating.

For those developers who don’t care about their star rating (although they really should), there are more reasons to care about their performance rating. Recently, Google announced that it will put more weight on engagement and performance data in its ranking algorithm.

This report was first launched last year and it summarizes the issues found when testing apps on a wide range of devices.

App stability is one of the areas that is tested against several physical Android devices to detect crashes. The report also scans the apps for over 30 issues concerning vulnerability and privacy leaks which may be flagged by the Google Security team. Furthermore, it captures screenshots and videos during the tests to be included in the report – which can significantly facilitate the process for developers to reproduce the issues and fix them.

According to Google, in 85% of the cases where the pre-launch report found a crash, the app was not pushed to production.

With this new dashboard, Google tried to assemble everything you need for a successful release.

To make this even more powerful, the Google Play Console lets you compare any two releases of your choice. So you can see how specific metrics compare to those of a previous release that you considered successful.

This section in the Google Play Console allows you to see the topics that people are talking about in your reviews and prioritize which topics are having the largest positive and negative impact on your rating in the store.

The new updates to this section are:

A brand-new part of the Google Play Console that allows developers to run a successful subscriptions business is the Subscriptions Dashboard. As a way to monetize apps, more and more developers choose the subscription model on Google Play to help them make money. According to Google, the number of subscribers has doubled in the last year alone.

The newly introduced dashboard pulls together all the key metrics the developers need, in one place. It includes the number of subscriptions, new activations and cancellations, daily and 30-day revenue, and subscriptions retention – this data is all super helpful for spotting trends, identifying anomalies and making smarter decisions.

To summarize, Google has drastically improved the Play Console to help developers build more stable apps and profitable businesses. So, if you’re an app developer or a publisher, make sure you encourage everyone in your company who contributes to your app’s success to become users of the Google Play Console.

Come back soon to read valuable insights on how you should amend your ASO strategy to drive maximum results from all the aforementioned changes to the Play Console.